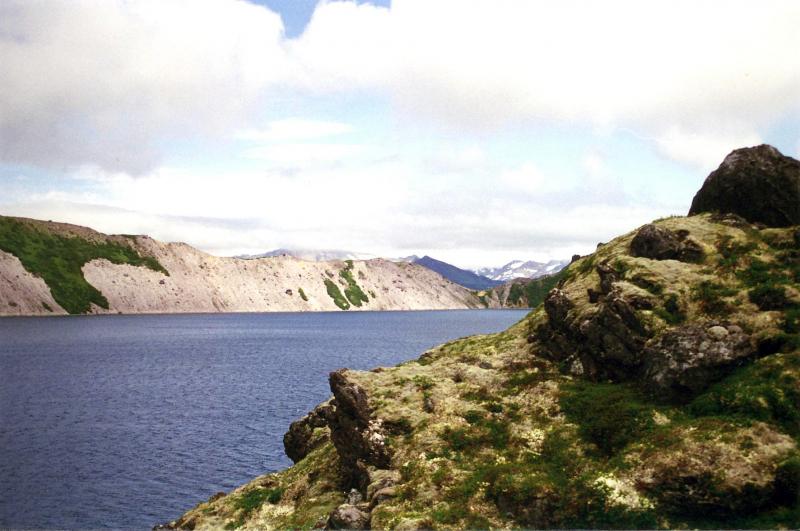 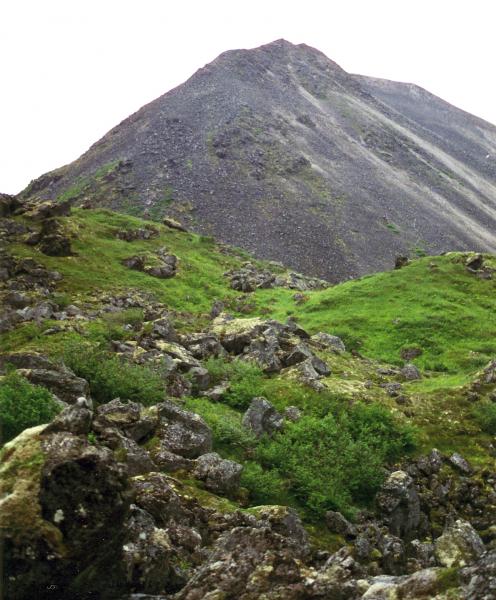 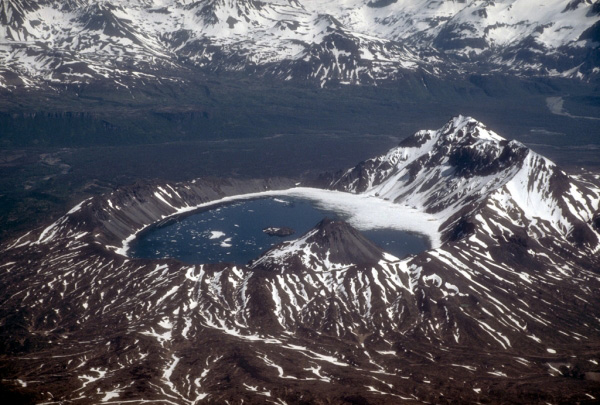 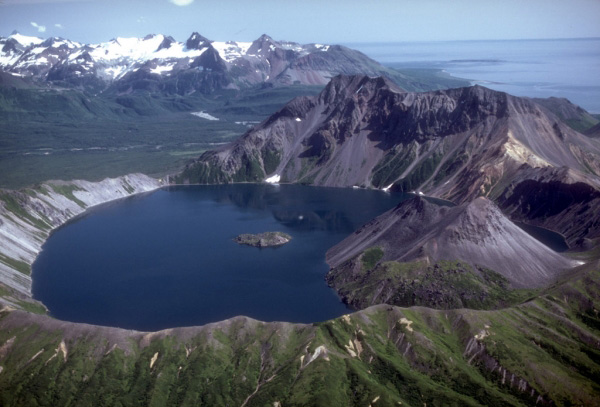 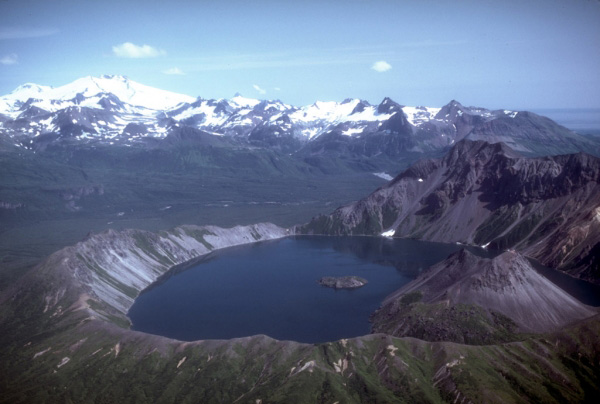 From Wood and Kienle (1990) [1]: "Kaguyak is a stratovolcano abbreviated by a caldera. The highest point on the caldera rim (901 m) is over 550 m above a crater lake (depth >180 m) that partially fills the caldera. The lake is 2.5 km in diameter. Exposed in the walls of the caldera are pre-caldera agglomerates, lava flows, dikes, and some small plugs. A saddle on the northwest rim of the caldera represents a pre-caldera stream valley that was beheaded by caldera formation. "An extensive apron of pyroclastic flow deposits surrounds Kaguyak crater. These deposits consist of white dacitic tephra and pumice and are the result of the caldera-forming eruptions. Immediately after eruption, the pyroclastic flows filled the stream valleys around the volcano. Subsequent stream erosion has provided exposures up to 30 m thick of the pyroclastic flows, but the base of the deposits has not been observed. A paleosol immediately on top of the pyroclastic flow deposits yields a C14 date of 1,060 yr BP; this is a minimum age for the caldera-forming eruption. The caldera has not been modified by glacial activity, thus making its origin post-glacial. "Both pre- and post-caldera domes are found at Kaguyak Crater. A pre-caldera dome (elevation 706 m) on the southeast flank of the volcano is heavily mantled by caldera-related pumice, while a post-caldera dome (elevation 616 m) on the east flank does not have any pumice mantle. Within the caldera two large post-caldera domes (elevation 614 m, 1 km diameter) have coalesced on the southwest edge of the caldera. A smaller dome forms an island rising ~10 m above the center of the lake. Weak solfataric activity has been reported from this dome but was not seen in 1982. "Kaguyak is better known than some of the other Katmai volcanoes. Caldera formation resulted from the eruption of a dacite with phenocrysts of augite, hypersthene, hornblende, quartz, and plagioclase. The extensive pyroclastic deposits surrounding Kaguyak suggest that tephra from the eruption might be widespread and, indeed, possible correlative tephras have been found 100 km from the volcano. Work is in progress to better define the timing of caldera formation and the petrochemical evolution of the Kaguyak system."
REFERENCES CITED
[1]
Volcanoes of North America: United States and Canada, 1990
Wood, C. A., and Kienle, Juergen, (eds.), 1990, Volcanoes of North America: United States and Canada: New York, Cambridge University Press, 354 p.
Contact AVO Privacy Accessibility Information Quality FOIA
URL: avo.alaska.edu/volcanoes/volcinfo.php
Page modified: September 29, 2020 12:19
Contact Information: AVO Web Team