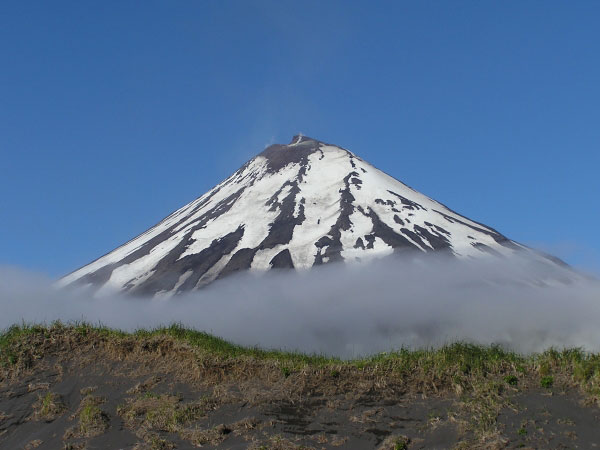 A view from camp of the east-northeastern flank of Mount Cleveland. Fumarolic steam is observed from the central main crater, and from a fumarole on the eastern side of the summit (a little downslope from the crater). This view shows the collapsed region of the southern portion of the crater rim (left side of the summit). There was no cut out portion observed by the field party in September 2002. The cut out (collapsed) part was first observed from a similar vantage point - though further out to sea - but due to more cloud cover that day, it was difficult to be certain of the change. This view in 2004 confirmed that some morphologic change took place at the summit since 2002.
Citation Information:
Image courtesy of Steve J. Smith.
Please cite Steve J. Smith when using this image. For permission contact him at iceburghwolves@charter.net.To obtain a high-resolution image, open the full size page. Then, right click on the image and click "Save Image As..." or "Save Picture as..."
Contact AVO Privacy Accessibility Information Quality FOIA
URL: avo.alaska.edu/images/image.php
Page modified: December 23, 2019 16:01
Contact Information: AVO Web Team