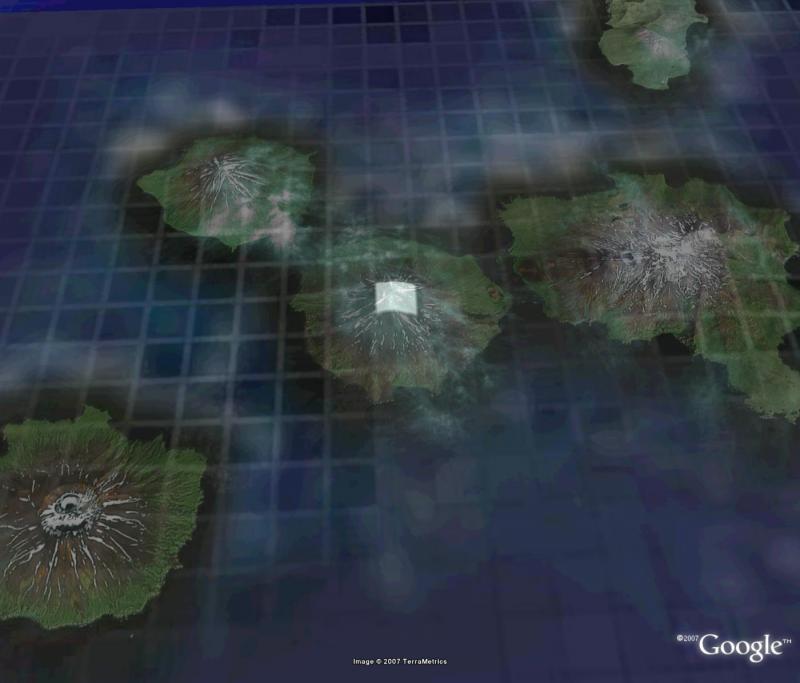 On the morning of Friday, July 20, an intense thermal anomaly and an associated steam plume were observed at Cleveland volcano in a satellite image, indicating that low-level eruptive activity is occuring. At that time the aviation color code was increased to Orange, and the volcano alert level was increased to Watch. Shown here is an AVHRR image from Monday, July 23 (08:44 UTC) placed as an overlay on a Google Earth image. The white pixel at the summit of Cleveland Volcano identifies the location of the thermal anomaly. No ash emissions have been detected in satellite data since October 2006, but the possibility of an explosion sending an ash cloud to heights in excess of 20,000 ft above sea level has increased. The lack of a real-time seismic network at Cleveland means that AVO is unable to track local earthquake activity related to volcanic unrest. Short-lived explosions with ash plumes that could exceed 20,000 ft above sea level can occur without warning and may go undetected on satellite imagery. Follow the links below to additional information. AVO Cleveland Activity Webpage: (http://www.avo.alaska.edu/activity/Cleveland.php) AVO's Images of Cleveland (http://www.avo.alaska.edu/volcanoes/volcimage.php?volcname=Cleveland)
Citation Information:
Image courtesy of the AVO/UAF-GI.
Please cite the photographer and the Alaska Volcano Observatory / University of Alaska Fairbanks, Geophysical Institute when using this image.To obtain a high-resolution image, open the full size page. Then, right click on the image and click "Save Image As..." or "Save Picture as..."
Contact AVO Privacy Accessibility Information Quality FOIA
URL: avo.alaska.edu/images/image.php
Page modified: December 23, 2019 16:01
Contact Information: AVO Web Team