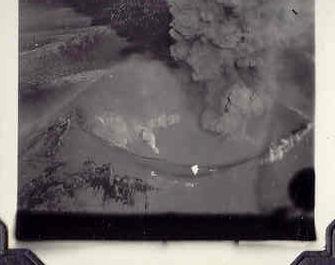 Images of Veniaminof erupting in either 1942, 1943, or 1944, taken by Lawrence Tyree while he was stationed with the US Army, commanding a battery unit in Cold Bay. He described the eruption to his granddaughter, Hester McEuen: As far away as it was from the battery it shed a light over the battery - the light from it cast a shadow. You could see chunks of lava being tossed finto the air and falling back, it was quite spectacular. The whole time I was there, it looked like an old man lying on his back blowing puffs of smoke rings. The eruption of Veniaminof was to a degree amusing. When it erupted the light was so bright the guard on duty came to my quarters and knocked on the door. It was after midnight. He said "Sir you ought to get out here and see this." Our quarters were underground. As we walked up the steps he said "Sir I didn't mean for that to sound like a command but you need to get out here and see this." The other thing that occurred was an earthquake that shook the area pretty good. I ended up on the floor, falling out of my bunk. One of the other guys and I sat there looking at each other from the floor. It knocked the guard on duty to the ground, that first initial shake. There were no aftershocks that I recall.
Citation Information:
Image courtesy of the photographer, Lawrence Tyree.
Please cite the photographer when using this image.To obtain a high-resolution image, open the full size page. Then, right click on the image and click "Save Image As..." or "Save Picture as..."
Contact AVO Privacy Accessibility Information Quality FOIA
URL: avo.alaska.edu/images/image.php
Page modified: December 23, 2019 16:01
Contact Information: AVO Web Team