List Display
LOCATION
FACTS
DESCRIPTION
From Hildreth and others (2007) [1]: "About 5 km east of Ukinrek Maars, a circular mesa of postglacial mafic lava (53.6-54.1 weight percent SiO2), ~1 km in diameter, stands 100 m above a surrounding hummocky lowland that consists of lake deposits and a debris-avalanche sheet derived from the Ugashik-Peulik edifice. The rugged surface of the mesa, corrugated by several pressure ridges, has not been overridden by either ice or avalanche, and the lava appears to have welled up in place and spread out locally, as if confined. The unit is compositionally similar to the postglacial lava flows that make up the cone and apron of Mount Peulik [2], but is distinguishable from all other units in the district. This enigmatic exposure may represent an authentic flank vent for Peulik magma, or, conceivably, a rootless secondary vent for invasive lava that had burrowed beneath the avalanche deposit."
REFERENCES CITED
[1]
Blue Mountain and The Gas Rocks: rear-arc dome clusters on the Alaska Peninsula, 2007 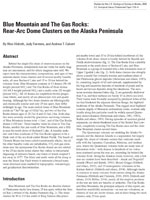