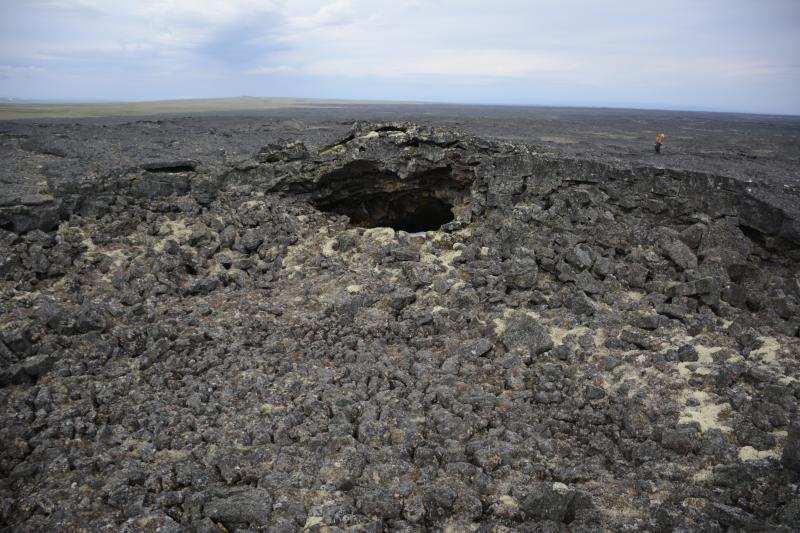 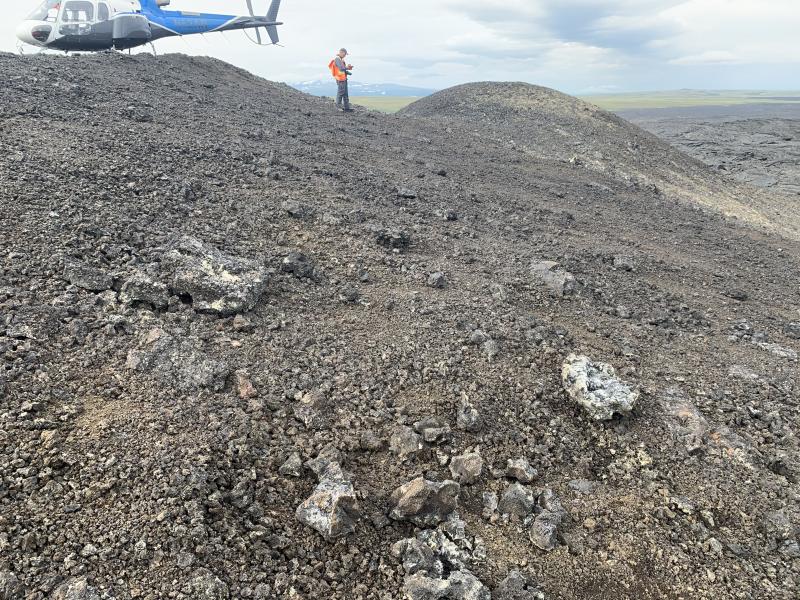 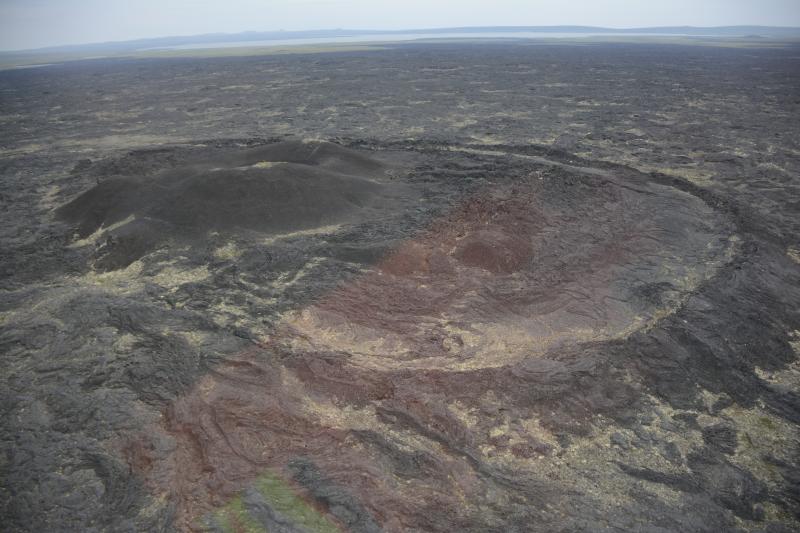 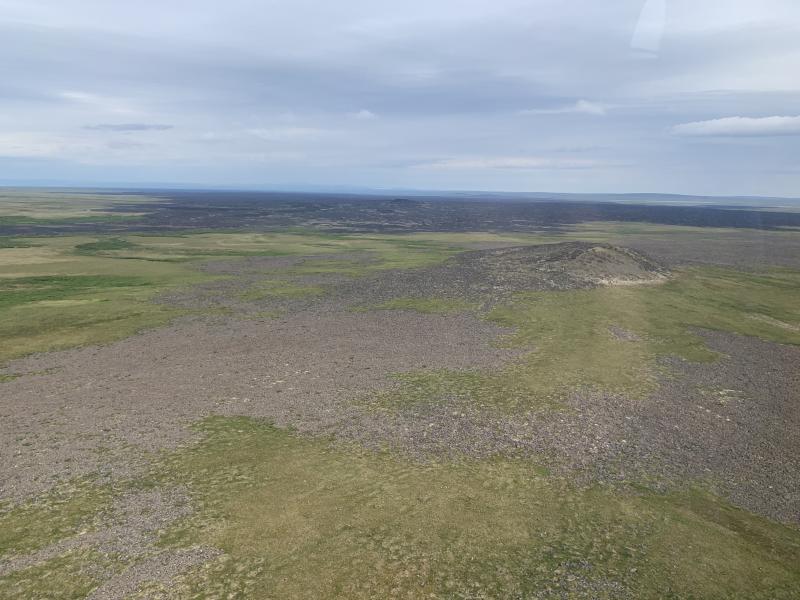 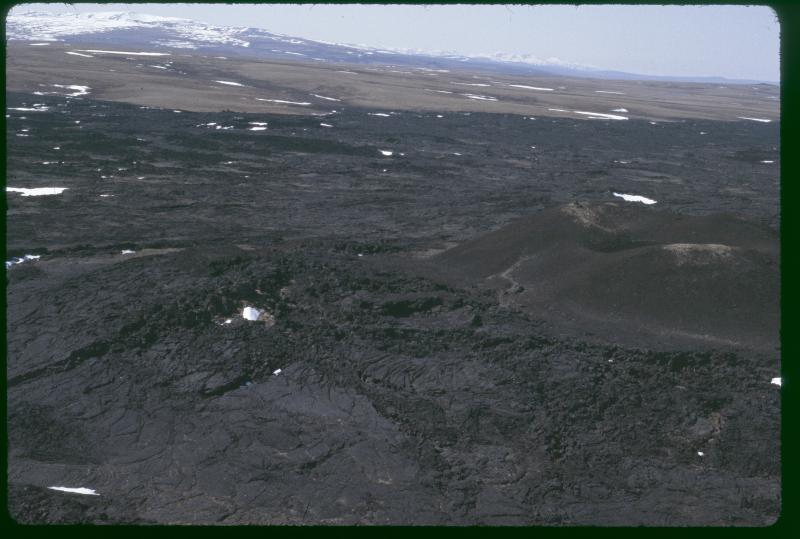 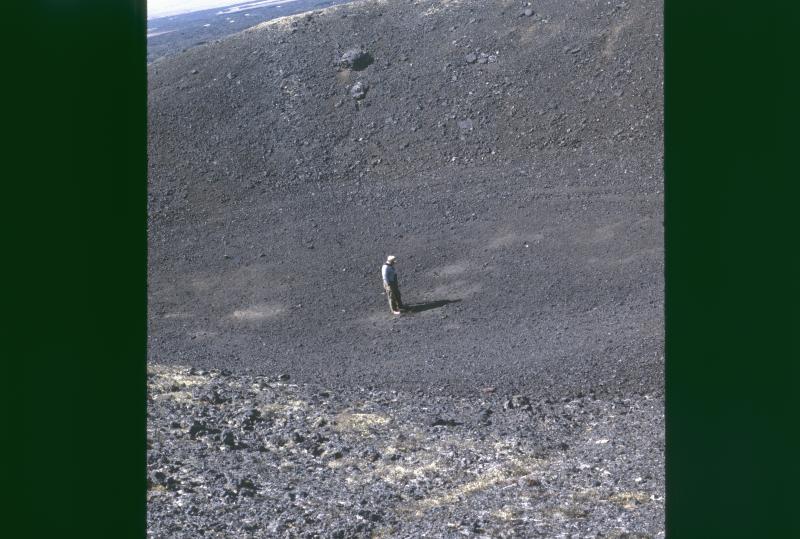 From Hopkins (1956) [1]: "The Lost Jim lava flow is a pahoehoe flow of olivine basalt, the youngest of a series of basaltic lava flows of Quaternary age comprising a lava plateau surrounding Imuruk Lake, Seward Peninsula, Alaska. The Lost Jim flow extends 17-1/2 miles westward from the source cone and covers more than 60 square miles. It ranges in thickness from 10 to about 150 feet. "Surficial features and internal structures indicate that the flow was emitted largely during early and late intense phases of a single eruption. The early part of the flow is rugged and has a surface that ranges in relief from 20 to 40 feet and that consists of pressure ridges, lava platforms, and lava plateaus intermingled with collapse sinks and broad, hummocky depressions. The late part is smoother in detail but contains a series of exceptionally deep collapse sinks and deformation structures resembling miniature volcanoes along a great lava tube extending 12 miles westward from Lost Jim Cone. "The inferred history of the eruption begins with a period of quiet emission of lava during which the flow advanced by the flow-unit mechanism nearly to its present boundaries. The early phase ended with the extrusion of cooler, more viscous lava represented now by patches of aa lava near Lost Jim Cone. "The late phase began when a surge of new lava intruded the base of the flow, arching the surface near the source vent. Distributary lava tubes in use during the early phase were closed by displacements along concentric high-angle reverse faults surrounding the source vent, but an outlet to the surface was soon reopened above the vent; Lost Jim Cone was built during an ensuing ash eruption. A larger outlet developed at the west base of the cone, and great quantities of new pahoehoe lava flooded the older part of the flow. Part of the new surface lava came from beneath the domed area; the dome collapsed along the concentric fractures, forming a series of hogback ridges that now ring Lost Jim Cone."
REFERENCES CITED
[1]
Structure and history of a basalt lava flow in Alaska, 1956
Hopkins, D.M., 1956, Structure and history of a basalt lava flow in Alaska [abs.]: Alaskan Science Conference, 4th, Juneau 1953, Proceedings, p. 237.
Contact AVO Privacy Accessibility Information Quality FOIA
URL: avo.alaska.edu/volcanoes/volcinfo.php
Page modified: September 29, 2020 12:19
Contact Information: AVO Web Team