List Display
LOCATION
FACTS
DESCRIPTION
This feature is part of the Savonoski River Cluster of volcanoes, as defined by Hildreth and others (2004) [1]. From Hildreth and others (2004) [1]: "Knob 1000 is a basaltic remnant (52% SiO2) only 400 m across, on the south bank of the Savonoski River about 2 km NNW of Cone 3110. The 100-m thick remnant forms a glacially scoured conical knoll that consists of finely vesicular lava (variously hackly, chunky, or sheet jointed) and a subequal proportion of crudely layered breccia and sintered scoria-rich rubble. Stratification and the abundance of coarse scoria indicate a local vent, and the textures and jointing suggest ice-contact emplacement. Products contain phenocrysts of clinopyroxene, olivine, and abundant small plagioclase, and minor magnetite. We first assumed the knob to be an erosional outlier of Cone 3110, but significant differences in K2O, TiO2, and Al2O3 support the likelihood of independent vents and magma batches."
REFERENCES CITED
[1]
Rear-arc vs. arc-front volcanoes in the Katmai reach of the Alaska Peninsula: a critical apprasial of across-arc compositional variation, 2004 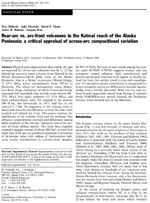