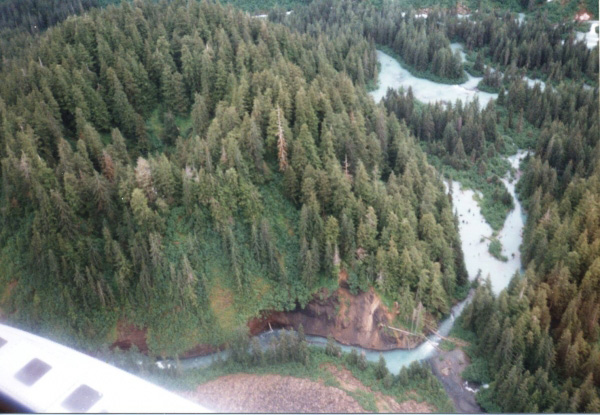 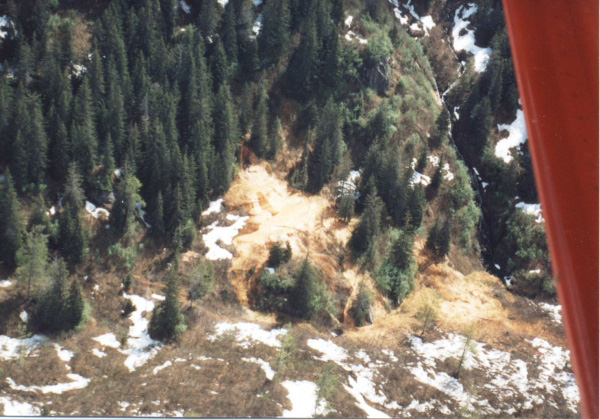 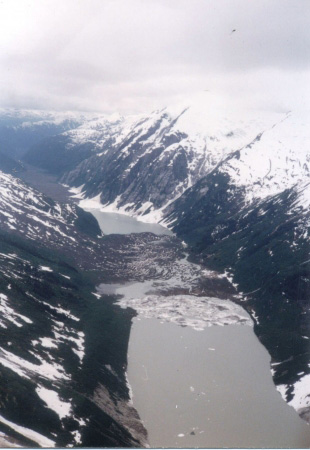 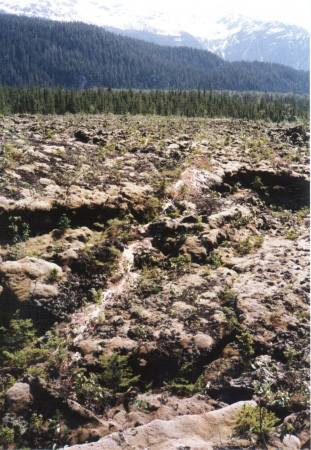 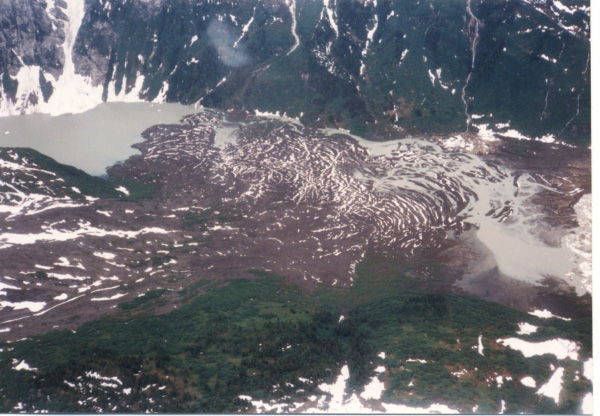 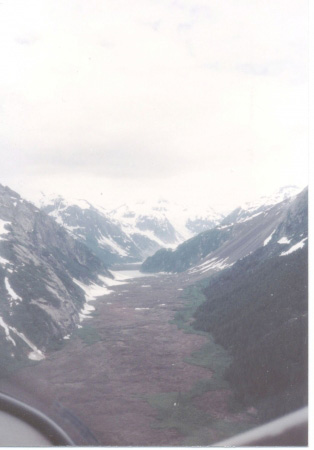 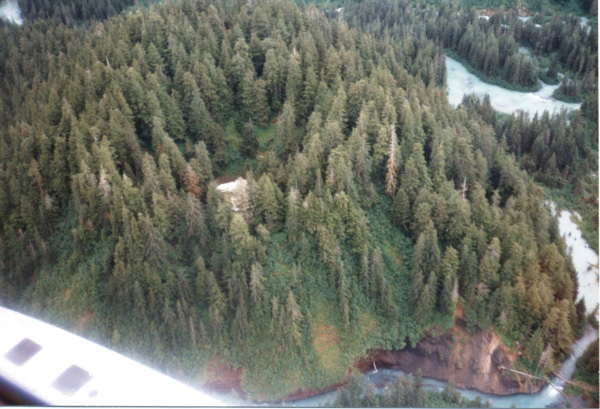 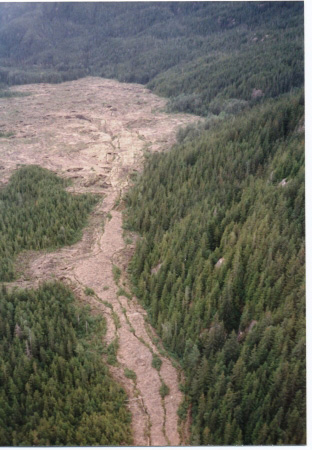 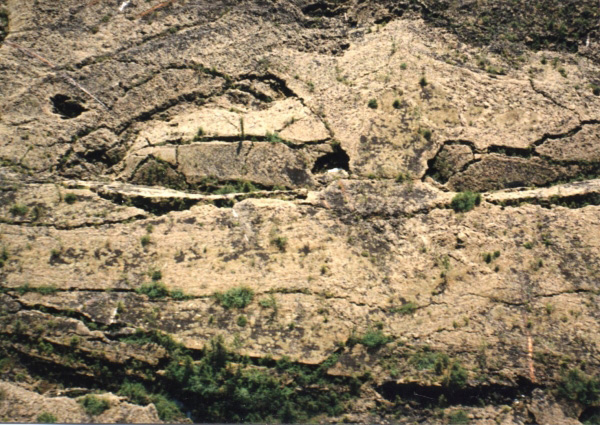 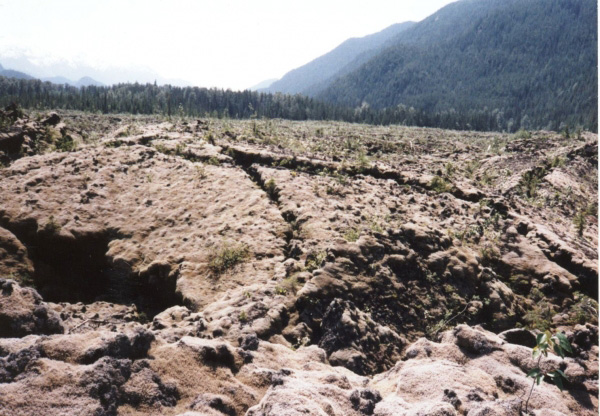 The Iskut-Unuk River cones are, strictly speaking, located in Canada. They are included here because flows from the Lava Fork valley flow south over the Alaskan border and into Alaska. From Wood and Kienle (1990) [1]: "The Iskut River cones comprise a group of six small basaltic centers in the southern part of the Stikine Volcanic Belt. The largest, Iskut Canyon Cone - a stratovolcano ~1 km across and 200 m high - is exposed on the steep southern slope of Iskut valley near its junction with Forrest Kerr Creek. This cone is the source of at least 10 thick lava flows which initially dammed Iskut River and are now exposed in a box canyon extending ~20 km downstream from the cone. The flows are divided into two groups separated by an erosion surface. A lower group of dark-colored alkali basalt flows predates wood that gave a C14 date of 8,780 yr BP. Wood from a gravel lens in an upper group of light-colored flows yielded a C14 date of 3,660 yr BP. Drilling to asses the hydroelectric potential of the canyon revealed that the subaerial flows are underlain by hyaloclastite resting on pre-eruption river gravel. "Cinder Mountain, a partly eroded composite cone at the head of Snippaker Creek, is the source of a basalt flow that extends 4 km north into Copper King Creek, where it rests on an alpine moraine. The edifice, which rises ~300 m above the surface of surrounding alpine glaciers, consists mostly of pillow lava and hyaloclastite breccia. These ice-contact deposits probably formed during a period of Holocene glacial advance when alpine glaciers extended to the limit of their present trimlines. The initial accumulation of hyaloclastite in a subglacial meltwater basin was followed by failure of the ice dam and eruption of the subaerial flow which entered Copper King valley after the meltwater had drained. "An isolated pile of subaerial basalt flows and associated pillow lava rest on varved clay and till in King Creek. This material probably originated from a small subglacial center that was roughly coeval with Cinder Mountain. "A pyroclastic cone ~300 m high (Snippaker Creek Cone) near the west flank of Cinder Mountain is the source of a narrow, levee-bounded flow that descended Snippaker valley for ~20 km, almost to its junction with Iskut valley. "About 1 kilometer north of the Alaska border, Unuk River valley is occupied by a blocky lava field that has forced the river against its eastern bank. The source of this flow is a cluster of dissected cinder cones in Canyon Creek, a small steep-sided tributary valley on the east side of Unuk River valley. "The flow in Lava Fork valley is probably the youngest in Canada. It issued from a vent near the crest of a ridge on the north side of the valley, where ropy pahoehoe lava is associated with irregular mounds of fire-fountain deposits, open lava tubes, and steep-walled lava troughs. No cone is present in the vent area, but thick deposits of loose tephra still cling to ledges on the surrounding granite peaks and form lenses within some of the adjacent glaciers. From the vent, at an elevation of ~1,200 m, the flows cascade down >1,000 m of steep granite cliffs to the broad valley of Lava Fork, where two small lakes are ponded above the flow. The main flow extends south along Lava Fork for 12 km to Blue River valley in Alaska, and along Blue River valley for another 9 km, where it spreads into a broad terminal lobe on the flat alluvial plain of Unuk River. Several successive overlapping lava flows with varying degrees of reforestation suggest intermittent eruptive activity separated by quiescent periods. Carbonized wood on one of the older flows yielded a C14 date of 360 yr BP. "All analyzed samples of lava from the Iskut cones are alkali olivine basalt."
REFERENCES CITED
[1]
Volcanoes of North America: United States and Canada, 1990
Wood, C. A., and Kienle, Juergen, (eds.), 1990, Volcanoes of North America: United States and Canada: New York, Cambridge University Press, 354 p.
Contact AVO Privacy Accessibility Information Quality FOIA
URL: avo.alaska.edu/volcanoes/volcinfo.php
Page modified: September 29, 2020 12:19
Contact Information: AVO Web Team