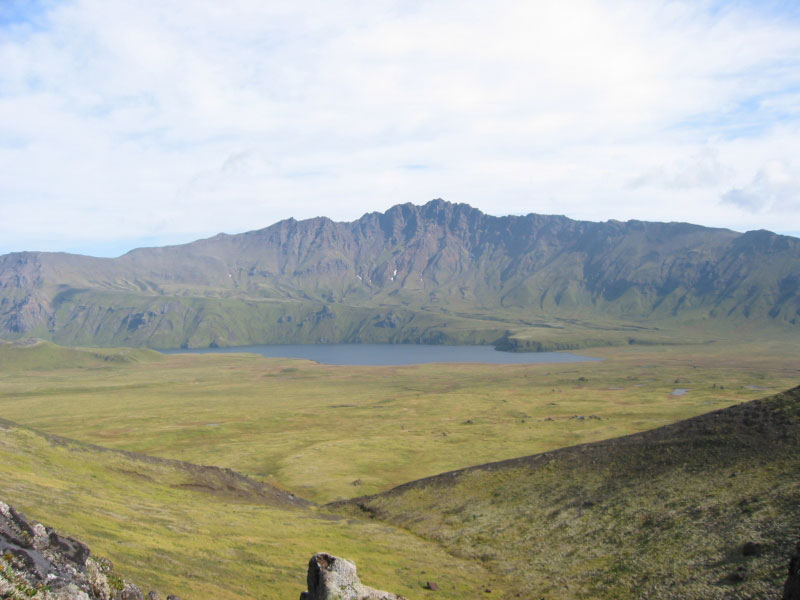 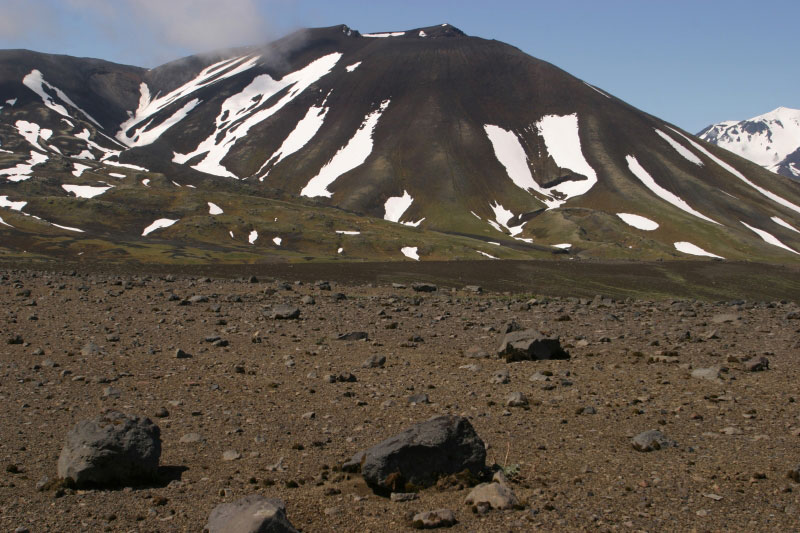 From Miller and others (1998) [1]: "Mount Cerberus comprises three young, relatively undissected composite cones, all of nearly equal height (800 m) and with basal diameters somewhat more than 3 km [2]. The cones all have summit craters and are built principally of andesitic lava flows and pyroclastic rocks. The easternmost crater is the smallest and most irregular in shape of the three; its vent has apparently shifted position slightly during or between past eruptions. Lava flows appear to have originated from flank eruptions below 500 m altitude. "About 1.6 km east of Mount Cerberus is a partially destroyed cone, 260 m above sea level. In the northeast part of the caldera, a small scoria mount (Lakeshore Cone; unit Qbl) was the source of two small lava flows 4 km northeast of Mount Cerberus, and a small scoria and agglutinate mound occurs 1.9 km south of Mount Cerberus. "Lava flows (unit Qbc) on the north flanks of Mount Cerberus appear in general to be younger than those on the south flank. The youngest flow, as distinguished by degree of ash and vegetation cover, extends 600 m from the north base of the west summit and is probably no more than a century old according to Coats (1959) [2].. Other individual flows, consisting of single or multiple pulses as defined by sets of lava levees, can be identified. Many older flows, particularly those on the north flanks of Mount Cerberus, have been largely buried beneath loose detrital material washed from the upper reaches of the cone. "A widespread blanket of pre-Cerberus dacitic ash, and younger andesitic or basaltic ash derived from the eruptions of Cerberus and two neighboring cones - Sugarloaf Peak and Lakeshore - may also have been active in historical time [2]. The summit of Sugarloaf Peak, 855 m high, lies about 4.4 km southeast of Mount Cerberus on the south coast of Semisopochnoi Island. Composed chiefly of pyroclastics with intercalcated lava flows up to 2 m thick (unit Qbs), it has a double parasitic cone on its south flank from which vapor is sporadically emitted. "The oldest rocks exposed on Semisopochnoi Island are deeply eroded remnants of a late Tertiary-early Pleistocene volcano that had an eruption center or centers somewhere within the central part of the present island. These rocks, termed the Pochnoi Volcanics, crop out northeast and west of Cerberus (unit Qtpl) [2]. Remnants of composite cones, perhaps slightly younger than and parasitic to a main volcano, are exposed around the margins of the island (unit Qtp). Four other cones, one of which may have contained a lava lake in its summit crater, and associated lava flows (unit Qlo) are distinguishable from the composite cone remnants by being less eroded [2]. The aforementioned deposits are glacially eroded, although the youngest of the cones only slightly so. After glaciation, large volumes of dacitic pumice and ash were erupted during formation of an elliptic caldera (8 km in greatest width) and formed pyroclastic-flow deposits on the flanks of the volcano. Deposits of post-caldera, pre-Cerberus eruptions are limited to sparse pyroclastic deposits and thin flows (unit Qbt) which extend from within the caldera out through a breach in the southeast wall. Flows from Cerberus and the smaller Lakeshore Cone have nearly covered the caldera floor; a small arcuate lake, 2.5 km long, lies along the inner northeast rim of the caldera. Nearly all deposits of Mount Cerberus are contained within the southern and western portion of the caldera. Flows have breached the southern caldera wall in two places and extend 2-5 km to the coast."
REFERENCES CITED
[1]
Catalog of the historically active volcanoes of Alaska, 1998