AVO uses several different types of data to monitor volcanoes for signs of unrest or eruptive activity. The data displayed here have not been reviewed in any way, and are preliminary unless reviewed by an AVO geoscientist.
RSAM

Veniaminof
RSAM: REAL-TIME SEISMIC AMPLITUDE MEASUREMENT
Real-time Seismic-Amplitude Measurement (RSAM) was developed by the USGS to summarize seismic activity during heightened volcanic activity. This technique for characterizing a volcano's changing seismicity in real time (as it is occurring) relies on the average amplitude of the signal from individual seismometers rather than on the locations and magnitudes of the earthquakes. During heightened volcanic activity, seismicity commonly reaches a level at which individual seismic events are difficult to distinguish. Analog seismic records (such as the webicorders) provide some information, but do not provide rapid quantitative analysis. Although several real-time earthquake-detection and recording systems exist, most fail to provide quantitative information during periods of intense seismicity, which is a common situation before a volcanic eruption. Yet it is precisely during such periods that the need for timely quantitative seismic information becomes most critical. To fill this need a simple and inexpensive real-time seismic-amplitude measurement system (RSAM) was developed. The RSAM computes and stores the average amplitude of ground shaking caused by earthquakes and volcanic tremor over 10-minute intervals. Increases in tremor amplitude or the rate of occurrence and size of earthquakes cause the RSAM values to increase. Rather than focusing on individual events, RSAM sums up the signals from all events during 10- minute intervals to provide a simplified, very useful measure of the overall level of seismic activity. The RSAM does not differentiate between volcanic activity and other sources of ground vibration such as wind, someone walking nearby, or a large regional earthquake. Thus one must be careful to not mistake wind noise or other non-volcanic signals for volcanic activity. RSAM works best during times of high activity when the volcanic signal dwarfs most noise. We also make no instrumental corrections when we calculate RSAM, so it has only relative units. The units should not be compared from station to station. We calculate RSAM values in real-time from our seismic data, and do not archive the RSAM values, as they can always be recalculated.
RSAM EXAMPLES 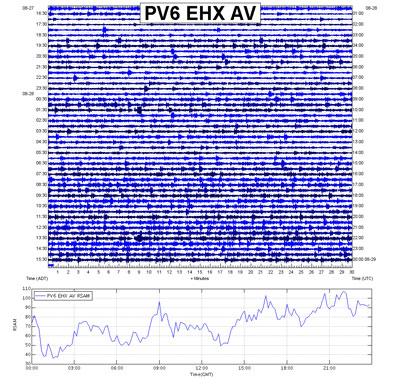 Figure 1. (Click for larger image.) The figure on the top is of a 24-hour webicorder and the bottom is of the RSAM plot for the same seismic station for the same time period. Note how the slight increases and decreases in seismic activity that can be noted visually in the webicorder can been more clearly and quantified in the time-series RSAM plot. Slight decreases in activity can be seen in the webicorder at approximately 1330 UTC (the time noted on the right side of the webicorder), 0200, and 0630. Also the overall trend of increasing activity is more easily seen in the RSAM plot. 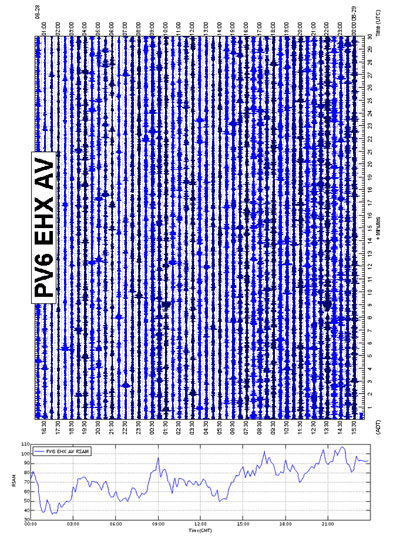 Figure 2. (Click for larger image.) In this figure, the webicorder (above) is rotated 90 degrees such that its time matches that for the RSAM plot (below). The waxing and waning of the seismic signal amplitude through the 24 hours as seen in the webicorder is represented as a time-series plot of RSAM.
Contact AVO Privacy Accessibility Information Quality FOIA
URL: www.avo.alaska.edu/rsam/index.php
Page modified: December 2, 2016 10:12
Contact Information: AVO Web Team