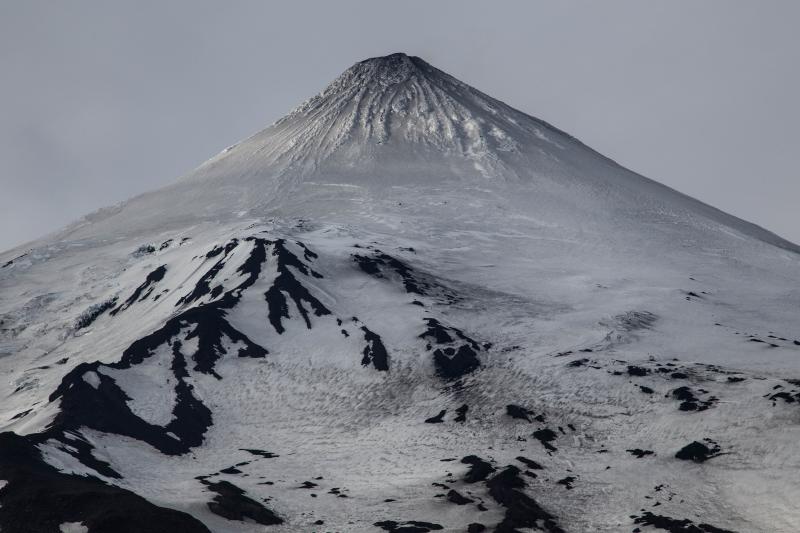 Shishaldin in June, 2014
Today is a double anniversary of eruptions at one of Alaskaâ€™s most active and beautiful volcanoes: Shishaldin.
One year ago, the current period of unrest and low-level Strombolian eruption deep within the summit crater commenced. The first sign of activity was an increased surface temperature detected from satellite. The 2014-2015 eruption has been monitored primarily using AVOâ€™s satellite image tracking system, as the seismic network at Shishaldin has been hampered by technical problems for a portion of this period. AVO also uses a web camera and infrasound detection and ground coupled air waves â€“ essentially the detection of pressure waves in the atmosphere produced by explosions at the volcano â€“ to evaluate and track ongoing activity. The current eruption has not had much impact on the surrounding terrain or air traffic. Localized dustings of ash and ballistics on the flank of Shishaldin attest to the vigor of some of the explosions during the last year. As occurred in 1999, however, Shishaldin is capable of significant explosions that send ash high into the atmosphere, and for that reason AVO remains vigilant for intensification of the activity.

In 1967, a short lived eruption was recorded with little detail about the nature of activity. Apparently on January 28, ash clouds followed sightings of intense steam emissions from the summit crater. No lava flows or other phenomena were observed. Of course in 1967, there were few tools to detect or evaluate eruptive activity at Alaskan volcanoes. It is likely that many small eruptions went unrecorded!