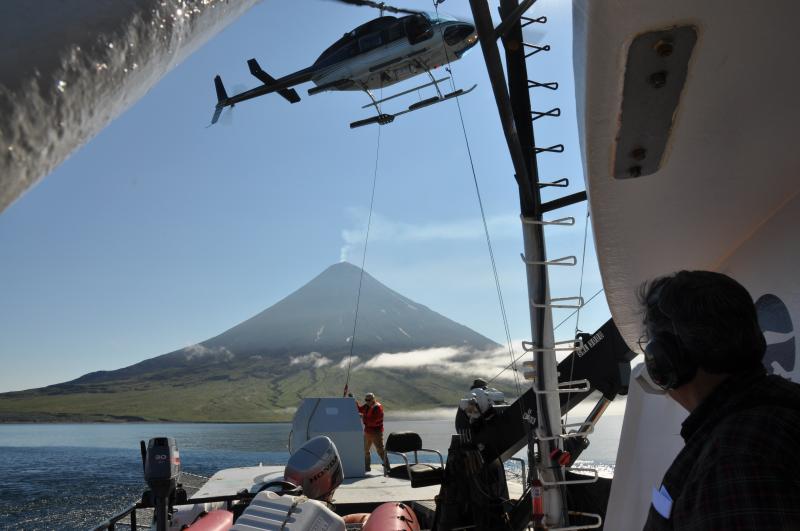 The Alaska Volcano Observatory (AVO) announces the addition of seismic, infrasound, and web-camera monitoring equipment on Chuginadak Island in the eastern Aleutians. To our knowledge, these are the first-ever geophysical monitoring stations on and near highly active Cleveland volcano. The work was made possible in part by logistical support from a three-year, multi-disciplinary National Science Foundation project on Geological Hazards, Climate Change, and Human/Ecosystems Resilience in the Islands of the Four Mountains, Alaska.

The new monitoring equipment was deployed at two stations on Chuginadak Island. Station CLES is located at the southeast base of Cleveland volcano and consists of broadband and short-period seismometers as well as two infrasound sensors. Station CLCO is located near Concord Point on the southeast coast of Chuginadak, about 15 km (9 miles) east of the volcanoâ€™s summit. CLCO hosts broadband and short-period seismometers, a web-camera, and an array of 5 infrasound sensors. Data are relayed to AVO offices for viewing, analysis, and alarming. Both stations are powered by batteries and solar panels.

This equipment significantly improves AVOâ€™s ability to detect eruptive activity at Cleveland and issue timely alerts of volcano hazards. The infrasound array will also improve AVOâ€™s ability to detect eruptions from volcanoes further west in the Aleutians. The limited number of seismic stations, however, does not support reliable forecasting of eruptions before they happen. For this reason, Cleveland will not be added to our list of Alaskaâ€™s volcanoes formally monitored by ground-based instrumentation.

Cleveland volcano, located 1500 km (940 miles) southwest of Anchorage, Alaska on the western part of Chuginadak Island, is one of the most active volcanoes in Alaska. The volcano has been in intermittent eruption for most of the past decade producing repeated explosions, short-lived ash clouds and localized ash fall, ballistic showers, lava flows, hot block and ash flows, and lahars that frequently reach the sea. Prior to this installation, AVO tracked this activity remotely using satellite resources, distant infrasound and seismic stations, occasional pilot and ground observations, and the World Wide Lightning Network.

AVO would like to thank to the National Science Foundation, Principal Investigators and participants of the NSF project, the U.S. Fish and Wildlife Serviceâ€™s Alaska Maritime National Wildlife Refuge, and the crew of the R/V Maritime Maid for making this installation possible.

For more information on Cleveland volcano activity, maps, and images from this summerâ€™s fieldwork and station installation, please see this AVO web page.