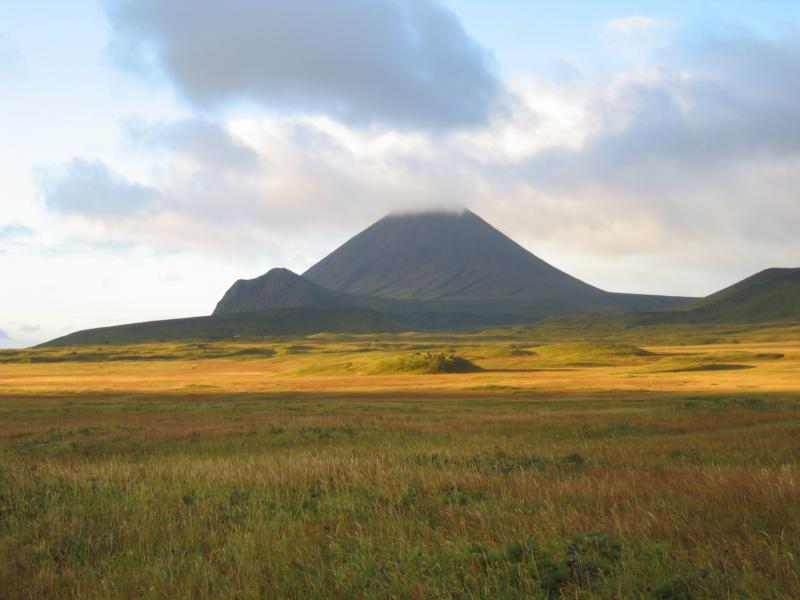 Abstract:
Semisopochnoi Island, located in the Rat Islands group of the western Aleutian Islands and Aleutian volcanic arc, is a roughly circular island composed of scattered volcanic vents, the prominent caldera of Semisopochnoi volcano, and older, ancestral volcanic rocks. The oldest rocks on the island are gently radially dipping lavas that are the remnants of a shield volcano and of Ragged Top, which is an eroded stratocone southeast of the current caldera. None of these oldest rocks have been dated, but they all are likely Pleistocene in age. Anvil Peak, to the caldera’s north, has the morphology of a young stratocone and is latest Pleistocene to early Holocene in age. The oldest recognized Holocene deposits are those of the caldera-forming eruption, which produced the 7- by 6-km caldera in the center of the island, left nonwelded ignimbrite in valleys below the edifice, and left welded ignimbrite high on its flanks. The caldera-forming eruption produced rocks showing a range of intermediate whole-rock compositions throughout the eruption sequence, although a majority of clasts analyzed form a fairly tight cluster on SiO2-variation diagrams at 62.9 to 63.4 weight percent SiO2. This clustering of compositions at about 63 weight percent SiO2 includes black, dense, obsidian-like clasts, as well as tan, variably oxidized, highly inflated pumice clasts. The best estimate for the timing of the eruption is from a soil dated at 6,920±60 14C years before present underlying a thin facies of the ignimbrite deposit on the island’s north coast. Shortly after the caldera-forming eruption, two scoria cones on the northwest flank of the volcano outside the caldera, Ringworm crater and Threequarter Cone, simultaneously erupted small volumes of andesite.

The oldest intracaldera lavas, on the floor of the caldera, are andesitic to dacitic, but are mostly covered by younger lavas and tephras. These intracaldera lavas include the basaltic andesites of small Windy cone, as well as the more voluminous basaltic andesites of three-peaked Mount Cerberus, which takes up most of the west half of the caldera and has erupted lavas that flowed to the sea on the southwestern coast of the island. Apparently active at the same time as Mount Cerberus, extracaldera Sugarloaf Peak at the southern point of the island has exclusively erupted basalts. Its young satellite peak, Sugarloaf Head, has erupted morphologically young lavas and cinder cones and may be the source of the last historical eruption in 1987. Several tephra sections on the east half of the island record as many as 50 tephras, mostly from Mount Cerberus, Sugarloaf Peak, and Sugarloaf Head, over the past several thousand years.

Eruptive products of Semisopochnoi Island show an overall compositional range of basalt to dacite, though basaltic andesite and andesite constitute the largest proportions of rock types. They are tholeiitic, low to medium K, and have geochemical characteristics typical of magmatic arcs. The earliest Pleistocene lavas are mostly basalts that show the greatest geochemical diversity, as illustrated by, for example, LaN/YbN ratios of 1.9 to 3.5, suggesting fluctuations in the magma source region over the hundreds of thousands of years recorded by these older lavas. The Holocene rocks, in contrast, follow arrays in compositional space that suggest crystallization differentiation from discrete, subtly different batches of magma under varying pressure and temperature conditions. Increasingly negative Eu anomalies and an only modestly increasing alumina saturation index value with differentiation suggest that plagioclase and mafic silicates (amphibole and pyroxene) were involved to varying degrees in fractional crystallization to produce Semisopochnoi’s magmatic diversity. The crystal-poor, andesitic magmas that erupted during caldera formation likely separated from a plagioclase-, amphibole-, and clinopyroxene-dominated crystal residue in the upper crust at less than 900 °C, possibly following a period of decreased magmatic flux. During the Holocene, basaltic Sugarloaf Peak appears to bypass any upper crustal magmatic storage region and erupt crystal-rich basalts. Recent seismic swarms and long-lived warm springs attest to ongoing magmatic activity.

The Holocene eruptive record at Semisopochnoi volcano is one of diverse eruptive styles as well as frequent eruptions from multiple vents located within and outside the caldera. The number and diversity of postcaldera vents means that the sites of future eruptions cannot be predicted with certainty. Future eruptions of ash similar in magnitude to the VEI 3 or less eruptions recorded in the documented tephra deposits would pose a hazard to aircraft in the region.
Contact AVO Privacy Accessibility Information Quality FOIA
URL: avo.alaska.edu/news.php
Page modified: December 2, 2016 10:12
Contact Information: AVO Web Team