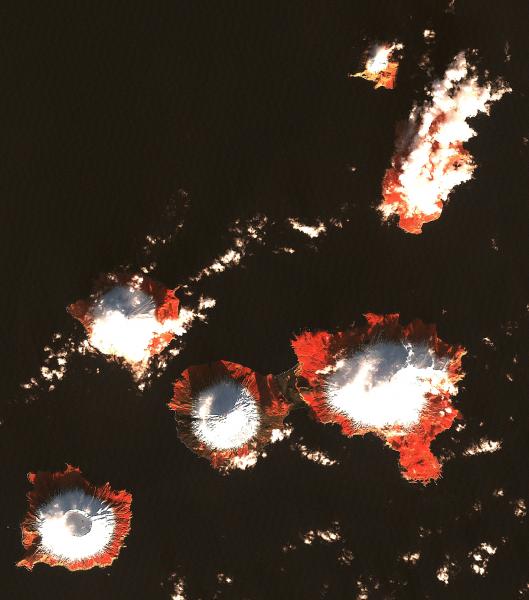 Landsat 7 ETM+ satellite image (Path 79, Row 23) of the Island of Four Mountains in the Central Aleutian Islands of Alaska. This image is a false color composite image produced by setting Landsat 7 bands 4-3-2 equal to the red-green-blue channels respectively. This image displays some of the volcanic deposits on the western and southeastern flanks of Mt. Cleveland from the Feb-Mar 2001 eruptions. The main 2001 lava flow is on the western flank, where a volcaniclastic debris flow was deposited earlier in the February 2001 eruption. Lahar deposits also extended down the south and southeast flanks. Most of the 2001 ashfall was on the eastern half of the edifice.
Citation Information:
Image courtesy of Steve J. Smith.
Please cite Steve J. Smith when using this image. For permission contact him at iceburghwolves@charter.net.To obtain a high-resolution image, open the full size page. Then, right click on the image and click "Save Image As..." or "Save Picture as..."
Contact AVO Privacy Accessibility Information Quality FOIA
URL: avo.alaska.edu/images/image.php
Page modified: December 23, 2019 16:01
Contact Information: AVO Web Team