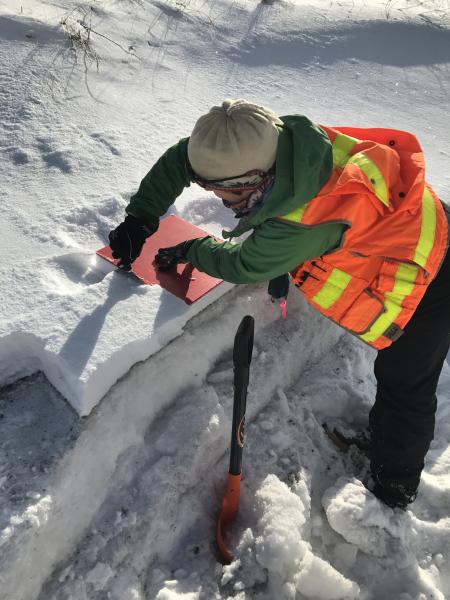 On February 19 AVO geologists, Janet Schaefer AVO/ADGGS and Kristi Wallace AVO/USGS, conducted helicopter-supported field investigations of the ash that fell on Unalaska Island during the January 30-31 Bogoslof eruption. Wind and exposure to sunlight since the ash fall event has caused the ash to be encased in ice and the exposed ash now appears as gray areas on the hillside. Samples were collected at nine locations across the island. Only trace amounts of ash were found at all sites (trace = less than 1/32 of an inch or less than 0.8 mm). In this photo, Kristi Wallace samples a measured area section of ash fall.
Citation Information:
Image courtesy of the AVO/ADGGS.
Please cite the photographer and the Alaska Volcano Observatory / Alaska Division of Geological & Geophysical Surveys when using this image.To obtain a high-resolution image, open the full size page. Then, right click on the image and click "Save Image As..." or "Save Picture as..."
Contact AVO Privacy Accessibility Information Quality FOIA
URL: avo.alaska.edu/images/image.php
Page modified: December 23, 2019 16:01
Contact Information: AVO Web Team