Fields of Study
You are here: Home > About AVO >

In Action - the Alaska Volcano Observatory: 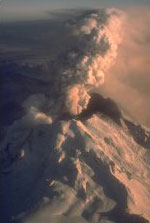 The Alaska Volcano Observatory (AVO) is a multi-agency organization composed of the US Geological Survey (USGS), University of Alaska Fairbanks Geophysical Institute (UAFGI), and the Alaska Division of Geological and Geophysical Surveys (ADGGS). It was established with the signing of a Memorandum of Understanding in 1988. AVO consists of a volcano crisis center at the USGS in Anchorage, a seismic data collection and archiving center at the UAFGI in Fairbanks, and other offices responsible for various tasks. AVO is the principal point of contact for information on volcanic activity and works closely with the National Weather Service (NWS), Federal Aviation Administration (FAA), the military and other state and federal emergency services. The three main tasks of AVO are:

If possible activity is detected, the Scientist-in-Charge and Coordinating Scientist are contacted.

In some cases, external observations including pilot reports (PIREPS) and ground observations trigger further investigations. The subgroups investigate the possible volcanic activity and, when activity is suspected, the Coordinating Scientist and Scientist in Charge are immediately notified.

The call down initiated by the Coordinating Scientist and Scientist in Charge is a rapid procedure which involves communication by telephone to notify critical agencies including Federal Aviation Agency (FAA), National Weather Service (NWS), the US Coast Guard, the Department of Defense, the Governor's Office, and the Alaska Department of Homeland Security and Emergency Management of the volcanic activity. While notification is in progress, these agencies will notify others based on each agency's responsibility.

The NWS provides the Alaska aviation community, other government agencies, and the public with forecasts and warnings for volcanic ash in the atmosphere. The NWS also has the responsibility of providing the AVO, the FAA and the Air Force with meteorological details during eruptions containing volcanic ash. Anchorage VAAC (Volcanic Ash Advisory Center) Website.