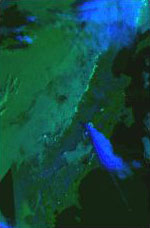 NOAA weather satellite image recorded by the Advanced Very High Resolution Radiometer (AVHRR) sensor of the eruption of Kliuchevskoi Volcano, Kamchatka, Russia.
Remote Sensing scientists use geostationary and polar orbiting satellite data to monitor and analyze volcanoes in Alaska and on the Kamchatka Peninsula, Russia. These data include: GEOS, GMS, Advanced Very High Resolution Radiometer (AVHRR), and Synthetic Aperture Radar (SAR). Most of these data are received and processed in real-time by ground receiving stations at the Geophysical Institute, located on the campus of the University of Alaska Fairbanks. Volcanic thermal anomalies (colloquially referred to as hot spots), eruption plumes, crustal deformation, lava flows, cones and other volcanic landforms are analyzed. In addition, the Puff plume tracking model is used to analyze plume movement and to predict its trajectory. A key use of satellite data is to monitor (often via AVO's internal web page) the positions of eruption plumes after eruptions and as they drift downwind away from the volcano. Within the last decade these plumes have disrupted air traffic as far from Alaska as the eastern seaboard of the United States and the central United States near the Mexican border. Thermal monitoring of volcanoes themselves (relatively new at AVO) has been used to monitor the emplacement of lava flows and the gradual heating of volcanic vents. In one notable case (the eruption of Okmok in 1997) thermal monitoring provided the first indication of a new eruption.
ADVANCED VERY HIGH RESOLUTION RADIOMETER
Since 1994 AVO has used the Advanced Very High Resolution Radiometer (AVHRR) on the NOAA polar orbiting satellites to monitor the volcanoes of the Alaska Peninsula, the Aleutian Islands, and the Kamchatka Peninsula. These areas are sparsely populated and most of the volcanoes are not seismically monitored. Remote sensing provides the only means to regularly observe activity at these distant eruption sites, and the high latitude location allows us to take advantage of frequent satellite coverage as the orbits converge and overlap near the pole. The entire region is observed approximately once each day as passes are received at the UAFGI. Six 512x512 kilometer subregions (centered on Augustine, Pavlof, Vsevidof, Korovin, Kiska, and Bezymianny) are used; often two passes will provide coverage of all of these. The images created from the satellite data are examined for thermal anomalies and eruption clouds. A thermal anomaly, or "hot spot", is an area in an image coincident with a volcano where one or more pixels (1.1 km on a side) report elevated temperatures relative to the surrounding ground. A hot spot may precede or accompany an explosive eruption, and the size and temperature of the hot spot are used as measures of the intensity of an event. Eruption clouds are identified by their shape, texture, temperature, location, and spectral characteristics. The two-band technique of subtracting channel 5 from channel 4 is useful for discriminationg a volcanic cloud from meteorological clouds.
PUFF REAL_TIME TRACER MODEL

Satellite image of Spurr eruption cloud
PUFF is a real-time tracer model developed by H. Tanaka to track volcanic plumes within a few hundred kilometers of an erupting volcano. The model is designed to provide high resolution, temporal and spatial information about the position of a plume with respect to the surrounding geography. Currently, PUFF is a research tool developed for AVO but will soon be used operationally by the National Weather Service in Anchorage. PUFF generates images showing the position and concentration of source particles. These results are compared to satellite images to confirm their accuracy and to "steer" the model. PUFF uses wind data and hypothetical particles to track the plumes. Gridded wind field data establishes the speed and direction of the eruption cloud. Variables including the height of the eruption cloud, particle size, settling rates and dispersion rates have default values but can be modified to "steer" the model. The defaultheight value is 16 km, which is the approximate upper limit of the meteorological data(UNIDATA). The default values of particle size are 10 mm to 100 mm. Stokes' law is used to estimate the settling rate of the particles. The default dispersion rate is 1 x 104 which is an estimated factor based on observations. Future research involves testing the sensitivity of the model by modifying the variables, and linking the variables to other physical principles.
INTERNAL WEB PAGE
An internal web page has been produced to enable remote sensing scientists and seismologists to monitor volcanoes from remote locations. When a person on duty detects possible volcanic activity, seismic tremor and satellite observations are made more frequently. Being able to monitor from the home is more convenient and can be done in a timely fashion.
Contact AVO Privacy Accessibility Information Quality FOIA
URL: www.avo.alaska.edu/about/remote.php
Page modified: December 2, 2016 10:12
Contact Information: AVO Web Team